One – Who said small?

ONE is a complete Plug-and-Play Audio Management System according to EN 54-16 / EN 54-4, in which Class D power amplifiers as well as a battery charger including battery are integrated in a single 2U enclosure.

The innovative Wall & Rack design allows mounting on a wall as well as in a rack, depending on the requirements of each project. 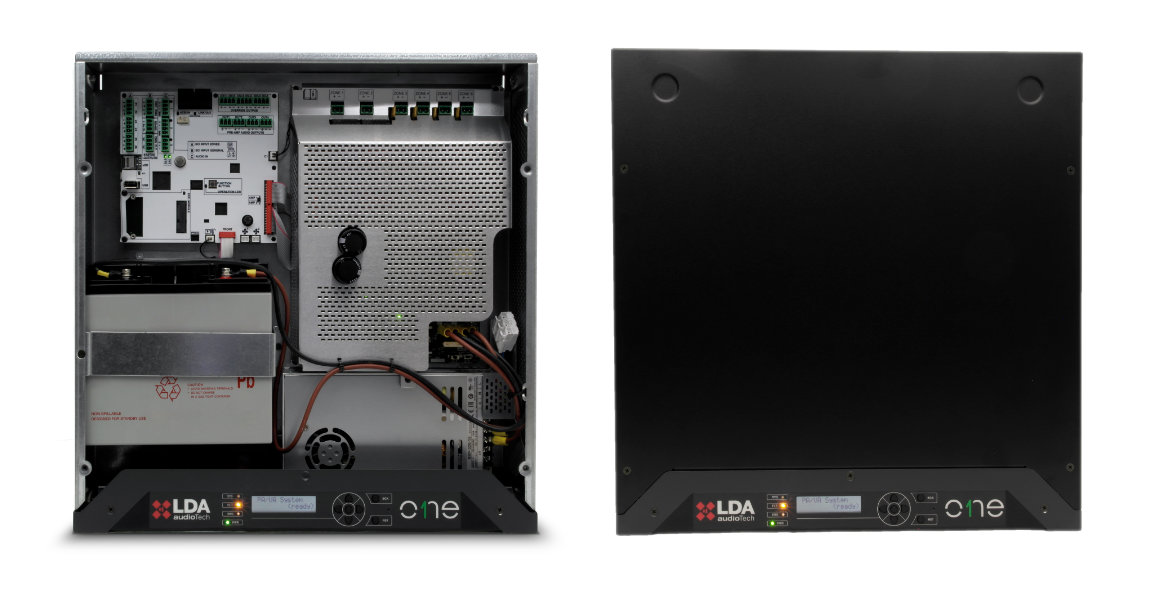 ONE includes 2 class D 100V amplifiers up to 500W of which 1 is used as backup amplifier in a sophisticated way, 6 independent audio zones, 3 priority controlled audio inputs, DSP, 6×6 digital audio matrix as well as a double message player for pre-recorded EVAC / ALERT messages. In addition, up to 8 paging stations can be connected.

ONE is very easy to install and configure, without the need for external applications or software. It also perfectly integrated with third-party technologies.

The design of ONE has been developed to require very little space. Optionally, ONE can also be mounted in an E30/F30 wall mount rack, thus saving on the costs for an E30/F30 room as required by local standards. As setup, commissioning and maintenance of a ONE system are very simple, this can significantly save time and costs. 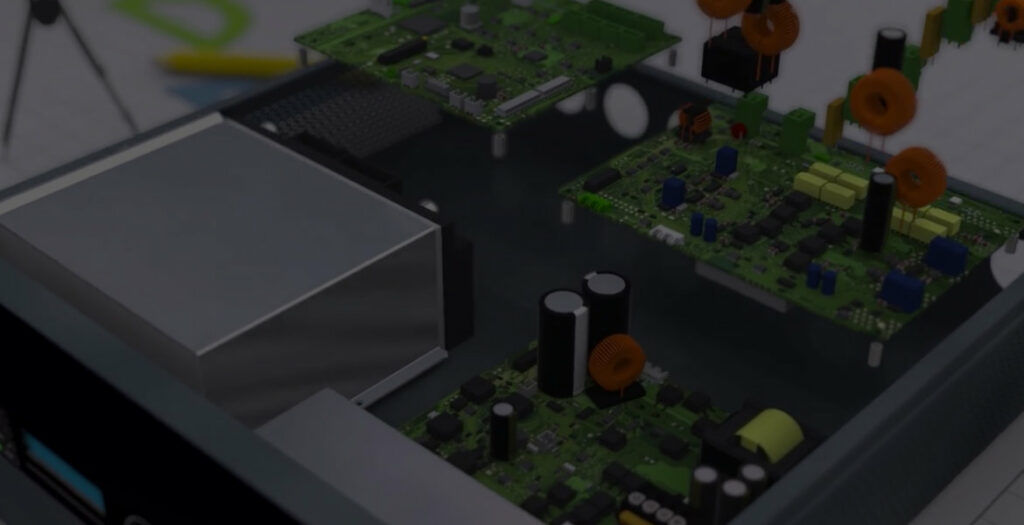 Second generation of „ONE 500“

LDA ONE reinvents itself and becomes expandable
The system now offers up to 60 zones and a total output of up to 5000 W.

The ONE 500, the most compact and cost-effective public address and Voice Alarm System on the EN 54 market, continues to develop. It becomes ONE v2, a solution that can now be expanded thanks to a firmware update and the creation of a proprietary ring with standard UTP cabling (LOOP04 / LOOP10).

The entire scaled System-ONE, and thus each of the associated devices and their cascade function, corresponds to the EN 54-16 standard.

To set up a ONE v2 system with expansion, you only have to use a single expansion card per system and only add this to the master device to close the ring of UTP cabling.

In order to achieve maximum flexibility and adaptation to the needs of our national and international customers, this new functionality was made available as part of an extensive firmware update. This was developed by our research and development department in Spain. The new firmware of ONE v2 makes it possible to cascade several ONE500 devices via a proprietary UTP cable ring. This means that a total of up to 10 ONE devices can be connected together to form a 60-zone system with a total output of 5,000W.

With immediate effect, all ONE devices delivered use the v2 firmware and the expandable functionality; strong>the previous devices can easily be updated with the same hardware and integrated expansion card *

ONE v2 is therefore the ideal system for installations with multiple zones and for installations with variable performance. This is the case with office buildings, schools, medical centers and hotels; a scalable and modular solution is required there, which does not do without advanced functions in terms of security and reliability.

Easy to configure and flexible
The network topology consists of master and slave devices with an extremely simple arrangement: All hardware units are the same, the devices with the connected expansion card can easily be configured as master and automatically search for the other connected devices.

The length between two connected ONE devices can be up to 200 meters.

Each device also offers all known ONE functions independently: integrated battery charger according to EN 54-4, backup amplifier, priority management and the option of A / B loudspeaker lines 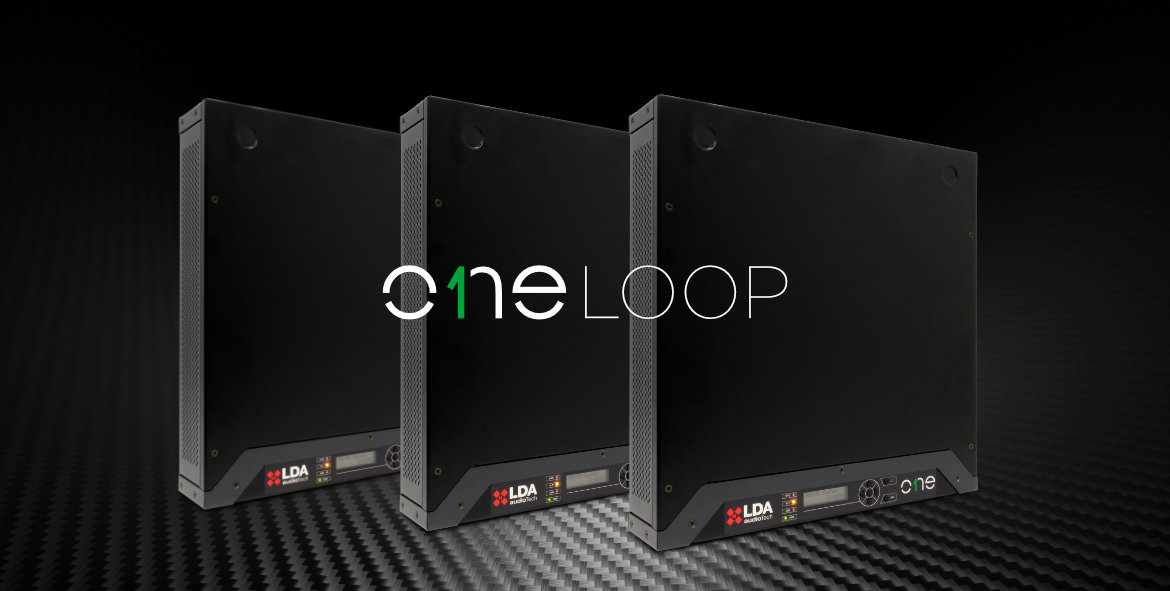 How does the ONE500 device become a fully functional ONE v2? By installing an expansion card “ONE-LOOP” (mini PCI-e format) to the master device in order to be able to close the UTP cabling ring. Only one expansion card (module) is required per system.

This module offers redundant communication within the system to be monitored and controlled in accordance with the requirements of the EN 54 standard. Two card models have been developed:

In their expanded configuration, both the master and the slaves include up to 6 zones each and 500 W of amplification @100 V, with the possibility of playing up to 2 simultaneous audios per unit

Up to 8 ACSI sources can be connected to the master device, sources such as MPS-8Z microphone or VAP-1 evacuation panel. So that these units will be used to launch voice or pre-recorded messages to any zone of the system (master or slaves) through keyboard expansion.

All the system equipment (masters and slaves) have 2 playlists with internal pre-recorded messages (EVAC and ALERT) for every 6 zones.

The integration of the system with fire panels can be done generally in any unit (EMG and RST interface) or zonally, using each of the ONE slave units. Likewise, each unit may be integrated through MODBUS RTU.

All master-slave device communication is ensured through the ring’s proprietary protocol, including supervision of slave devices and notification of failures and evacuation, among other functions.

*) Only equipment with serial number 20xxxxx or greater can be updated!

MORE INFORMATION ABOUT THE NEO SYSTEM ON OUR PARTNER PAGE.